Sinal do cut-off do cólon

Scientists have identified a new genetic variant that appears to protect against cardiovascular disease, even in individuals with a diet high in animal fat.

Scientists sequenced the entire genome of 250 inhabitants of Mylopotamos in northern Crete to get an in-depth view of why the villagers live long and healthy lives, despite consuming a diet high in animal fat. They identified a variant, rs145556679, was associated with decreased triglycerides and very low density lipoprotein cholesterol (VLDL).

The authors said the variant may be almost unique to the Mylopotamos population. The genome sequencing results of thousands of Europeans has only revealed one copy of the variant in a single individual in Tuscany, Italy. A separate variant in the same gene has also been found to be associated with lower levels of triglycerides in the Amish founder population in the United States.

Lead author, Professor Eleftheria Zeggini from the Wellcome Trust Sanger Institute commented: “This study shows the importance of looking at the entire genome to better understand the genetic architecture of a population. We are finding new genetic variants we haven’t seen before. We have discovered a medically relevant genetic variant for traits related to cardiovascular disease.”
The findings are published in Nature Communications .

Are the health benefits of moderate drinking overstated?

A number of recent studies have highlighted the benefits of light to moderate alcohol consumption and the risks associated with alcohol abstention. However, experts are now warning that these benefits may be overstated.

A new study, published in the Journal of Studies on Alcohol and Drugs , analysed data on 9,137 adults from the UK’s National Child Development Study, looking at patterns of alcohol and cigarette use from young adulthood to midlife.

It found health benefits of stable low-dose alcohol use (versus. abstention) were weakened by the fact that by age 55 almost all alcohol “abstainers” in its sample were former drinkers, and that respondents who followed infrequent drinking/abstention paths were the most likely to report poor health, psychological distress, and low educational qualifications in early adulthood.

“Alcohol abstainers are a diverse group. They include former heavy drinkers who quit due to problems with alcohol, as well as those who quit drinking due to poor health, and not just lifetime abstainers,” said co-author Jeremy Staff.

“Medical professionals and public health officials should be wary of drawing conclusions about the so-called ‘dangers’ of never drinking without more robust evidence,” Staff concluded. 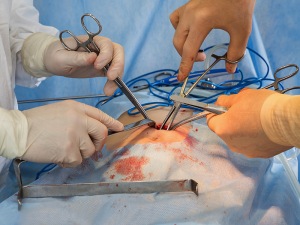 Bariatric surgery reduces not only the incidence of overall cancer in obese women, as has been previously reported, but also the risk for female-specific cancers. In particular, it is associated with a significantly reduced risk for endometrial cancer, new results from the Swedish Obese Subjects (SOS) study indicate.

“Obesity is an important risk factor for cancer [and it] is also associated with more advanced cancer disease and increased cancer mortality,” Asa Anveden, MD, University of Gothenburg, Sweden, and multicenter colleagues observe.

“The main finding of this study is that bariatric surgery also is associated with reduced risk of female-specific cancer, here defined as breast, endometrial, ovarian, and all other gynaecological cancers,” they add.

Findings were published in the May issue of Gynecologic Oncology.

The SOS study is an ongoing, nonrandomized, prospective controlled trial in which investigators aim to determine the long-term effects of bariatric surgery on multiple health endpoints.

In 2009, SOS investigators reported that bariatric surgery reduced cancer risk in obese women but not in men.

The current analysis involved 1420 women from the SOS cohort who had undergone bariatric surgery and 1447 other women matched as controls who received standard treatment for obesity.

At baseline, the mean age of the cohort was 37 years and the mean body mass index (BMI) was 38 kg/m2 or higher.

Among SOS women, 18.3% had undergone nonadjustable or adjustable gastric banding; 68.3% were treated with vertical banded gastroplasty, and 13.4% underwent gastric bypass.

After their surgery, SOS women lost a mean of 28.0 kg at 2 years, some of which was regained at 10 and 15 years’ follow-up, but the weight loss was still significant at approximately 21 kg at both time points.

In contrast, “mean weight changes in the control group were small,” Dr Anveden points out.

At a median follow-up of 18.1 years, investigators found that the risk of developing any cancer was 29% lower among women who had undergone bariatric surgery than among controls, at a hazard ratio (HR) of 0.71 (P < .001).

“Of the first time cancers, 49% were female-specific,” investigators add.

And among those female-specific cancers, bariatric surgery reduced their incidence by 32% compared with receipt of conventional treatment alone, at an HR of 0.68 (P = .004).

On the other hand, a separate analysis showed that while incidence rates for all types of female-specific cancers except cervical cancer were lower in the surgery group, the difference between the two groups was significant only for endometrial cancer, where surgery reduced the risk by 44% compared with controls (P = .014).

Interestingly, the greater benefit from surgery over conventional treatment in terms of cancer risk reduction was most pronounced in women with medium (P = .36) or high (P = .007) baseline insulin levels relative to those with low insulin levels. As the authors point out, it has been suggested that hyperinsulinemia may be a causal link between obesity and cancer.

In contrast, there was no interaction with baseline BMI. Results were also very similar when adjusted for age, BMI, and smoking.

The association between bariatric surgery and female-specific cancer is noteworthy. Anveden et al

“The association between bariatric surgery and female-specific cancer is noteworthy as these comprised about half of the observed cancer events in our cohort and are common in the obese population,” researchers observe.

“Sadly, it is pretty clear now that most current nonsurgical weight-loss strategies do not result in significant, sustained weight loss,” Dr Argenta said in an email.

“The SOS study demonstrated — again — that bariatric surgery is effective over a period of at least years and is associated with some health benefits, most notably for women,” he added.

It’s also extremely uncertain at what age a drastic medical intervention like bariatric surgery should be undertaken, he noted.

The fact that childhood obesity is a marked risk factor for adult obesity is perhaps reason enough to consider early intervention, reducing later risk for  diabetes, cardiovascular disease, and cancer.

On the other hand, “we also have to consider early and late surgical morbidity as well as prolonged metabolic derangement as arguments against early intervention,” Dr Argenta observed.

Logically, the decision to offer bariatric surgery to obese women should be tailored to their individual risk for cancer.

“While bariatric surgery appears to reduce the risk of getting cancer, most patients with obesity-related endometrial cancer, for example, will ultimately die of non-cancer-related causes, most notably cardiovascular disease,” Dr Argenta said.

“For this reason, bariatric surgery might be most effective in high-risk patients, where it potentially could reduce the risk of developing obesity-related cancer and provide patients with nononcological benefits as well,” he added.

Dr Argenta authored an editorial that accompanies the paper, in which he writes: “The SOS study demonstrates in a prospective fashion what was previously suggested in retrospective studies and meta-analysis — that bariatric surgery is associated with a reduction in the incidence of primary cancer diagnoses, most notably for women and most notably for endometrial cancer.

“This manuscript is the latest in a series of reports from the SOS study which suggest that bariatric surgery-related weight loss is associated with reduced rates of multiple health hazards including: overall mortality, diabetes, stroke, myocardial infarction, atrial fibrillation, and gout attacks,” he adds.

“Yet despite the benefits that accrued to patients in the bariatric surgery cohort, previous reports from the SOS trial also suggest that patients undergoing bariatric surgery were hospitalized more frequently and used more inpatient and outpatient resources, particularly in the first six years after surgery. Though these costs were partially offset by lower medication cost from years 7-20 following surgery it remains unclear if they were accompanied by improvements in oncologic mortality or quality of life (which was statistically similar between surgically and medically treated patients at 10 years), he notes.

Reducing fine particulate matter (PM2.5) emissions should be an urgent public health priority and policy measures should be introduced to address pollution from the worst offenders such as diesel vehicles.

That’s according to Dr Nay Aung, a cardiologist and Wellcome Trust research fellow, who has just published a new study looking of 4,255 participants from the UK Biobank which found linear relationships between ambient PM2.5 levels and cardiac structure and function. Every 5μg/m3 increase in exposure was associated with a 4-8 per cent increase in left ventricular (LV) volume and a 2 per cent decrease in LV ejection fraction.

The research also found people with higher education levels were less likely to experience harmful effects on the heart from pollution. This could be due to a number of factors including better housing and workplace conditions, being more aware of their health, having healthier lifestyles, and better access to healthcare.
Dr Aung warned that while average exposure to PM2.5 in the UK is about 10μg/m3, below the European target of less than 25 μg/m3, “we are still seeing these harmful effects”. He added: “This suggests that the current target level is not safe and should be lowered.”